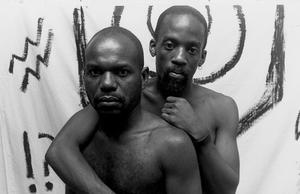 No Regrets: A Celebration of Marlon Riggs

Marlon Riggs (1957–1994) was a graduate of and professor at UC Berkeley’s Graduate School of Journalism who employed the medium of video to engage critically with African American (and American) culture, representation, and identity. Riggs is best known for his brilliant 1989 video essay Tongues Untied, a riveting combination of interviews, performance, stock footage, autobiography, poetry, and dance that elucidates the revolutionary potential of black men loving black men. Aiming to reach the broadest possible audience, Riggs made videos for public television, but he resisted the conventions of talking-head documentaries, using innovative approaches to construct provocative, layered, and lucid works that have maintained an enduring presence at film festivals, cinemas, and universities internationally.

Riggs was diagnosed with HIV while making Tongues Untied, but continued to advocate for gay rights and the end of the silence around the illness both on and off screen. His final film, Black Is . . . Black Ain’t (1995)—completed posthumously by his collaborators—is a sweeping investigation of the heterogeneous nature of African American identity, suggesting the need for inclusive definitions of blackness that transcend patriarchal and homophobic barriers to community.

Celebrating the thirtieth anniversary of Tongues Untied and nearing twenty-five years since the release of Black Is . . . Black Ain’t, this retrospective includes all of Riggs’s films along with works by filmmakers addressing similar issues in a variety of innovative ways.

Long Train Running: A History of the Oakland Blues

Riggs and Peter Webster’s thesis project reflects on the heyday of Oakland blues in the late 1940s and ’50s, chronicling the city’s vibrant past while revealing an uncertain present. With Karen Everett’s profile of Riggs, I Shall Not Be Removed.

Word Is Out: Stories of Some of Our Lives

Tongues Untied is also presented in a free screening on Monday, November 25 (with Ken Light, Darieck B. Scott, and Leila Weefur in conversation).

Reflections and Affirmations: Marlon Riggs and Others

This program puts the work of Marlon Riggs in conversation with that of other artists reflecting on, affirming, and celebrating their identities, including Julie Dash, Isaac Julien, Thomas Allen Harris, and Brontez Purnell.

Riggs interrogates how material culture perpetuates racial stereotypes in this powerful and unblinking work. Followed by Color Adjustment, in which Riggs extends his examination to network television.

Cheryl Dunye’s first feature, on a lesbian video-store clerk and would-be filmmaker who becomes obsessed with the career of an early “race film” star, is “funky screwball comedy in the key of queer” (B. Ruby Rich).

Thomas Allen Harris explores the intersections of race, family, and sexuality in this pioneering essay film, which focuses on three groups of queer black siblings, including the director and his brother.

Ken Light, Darieck B. Scott, and Leila Weefur in Conversation