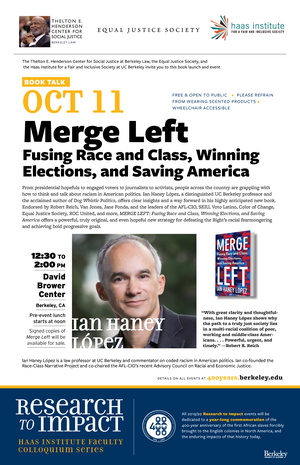 The Thelton E. Henderson Center for Social Justice at Berkeley Law, the Equal Justice Society, and the Haas Institute for a Fair and Inclusive Society at UC Berkeley invite you to this book launch and event.

Signed copies of Merge Left will be available for sale.

From presidential hopefuls to engaged voters to journalists to activists, people across the country are grappling with how to think and talk about racism in American politics. Ian Haney López, a distinguished UC Berkeley professor and the acclaimed author of Dog Whistle Politics, offers clear insights and a way forward in his highly anticipated new book. Endorsed by Robert Reich, Van Jones, Jane Fonda, and the leaders of the AFL-CIO, SEIU, Voto Latino, Color of Change, Equal Justice Society, ROC United, and more, MERGE LEFT: Fusing Race and Class, Winning Elections, and Saving America offers a powerful, truly original, and even hopeful new strategy for defeating the Right’s racial fearmongering and achieving bold progressive goals.

Ian Haney López teaches in the areas of race and constitutional law. One of the nation’s leading thinkers on how racism has evolved since the civil rights era, his current research emphasizes the connection between racial divisions in society and growing wealth inequality in the United States. In Dog Whistle Politics: How Coded Racial Appeals Have Reinvented Racism and Wrecked the Middle Class (2014), Haney López detailed the fifty-year history of how politicians exploit racial pandering to fracture social solidarity and ultimately to convince many voters to support rule by the rich.

After publishing Dog Whistle Politics, Haney López co-chaired the AFL-CIO’s Advisory Council on Racial and Economic Justice and then co-founded the Race-Class Narrative Project, exploring how to defeat dog whistle politics. His most recent book, Merge Left: Fusing Race and Class, Winning Elections, and Saving America (2019), explains how the political manipulation of coded racism has evolved in the Trump era, while also offering an evidence-based approach to neutralizing political racism and building cross-racial solidarity.

Haney López holds an endowed chair as the Chief Justice Earl Warren Professor of Public Law at the University of California, Berkeley. He is also the author of White by Law as well as Racism on Trial, books that respectively critique the legal construction of white and Latinx racial identity. From legal scholarship to commentary, his writings have appeared across a range of sources, from the Yale Law Journal to The New York Times. He has been a visiting law professor at Yale, New York University, and Harvard, and holds a master’s degree in history from Washington University, a master’s in public policy from Princeton, and a law degree from Harvard. He lives in Richmond, California.