Berkeley Conversations: The Future of Freedom: Reparations after 400 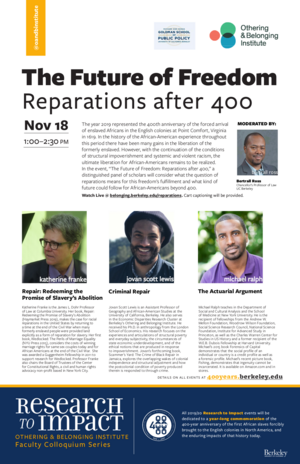 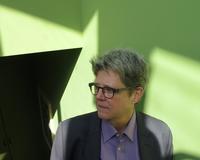 In Repair: Redeeming the Promise of Slavery’s Abolition, Katherine Franke will make a powerful case for reparations for African Americans by amplifying the stories of formerly enslaved people and calling for repair of the damage caused by the legacy of American slavery.  Franke unpacks intergenerational, systemic racism and white privilege at the heart of American society and argues

that reparations for slavery are necessary, overdue, and possible.

Katherine Franke is the James L. Dohr Professor of Law at Columbia University.

Her book, Repair: Redeeming the Promise of Slavery’s Abolition (Haymarket Press 2019), makes the case for racial reparations in the United States by returning to a time at the end of the Civil War when many formerly enslaved people were provided land explicitly as a form of reparation for slavery. Her first book, Wedlocked: The Perils of Marriage Equality (NYU Press 2015), considers the costs of winning marriage rights for same sex couples today and for African Americans at the end of the Civil War.  She was awarded a Guggenheim Fellowship in 2011 to support research for Wedlocked.

Professor Franke also chairs the Board of Trustees of the Center for Constitutional Rights, a civil and human rights advocacy non-profit based in New York City. 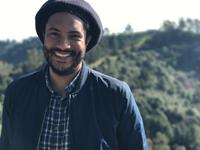 Long thought to be unlikely, reparations has become a seriously debated topic over the past several years in both the US and the Caribbean, dramatically shifting the possibility of politically-supported reconciliation of the crime of African enslavement in the Americas. However, while support has grown, politicians, activists, and academics alike continue to struggle to determine what reparations would be, and how the calculation of culpability could determine the full cast of responsible parties. For criminals in Jamaica who participate in a lottery scam that targets white North Americans the answer is simple. Through a novel logic of criminal repair, scammers demonstrate that the coevally perceived crimes of slavery and contemporary Black poverty may best be answered by crime. In the facilitation of this view, lottery scammers identify a fungible racialization whereby reparative guilt is carried by the general culpability of whiteness itself, making irrelevant the particular geographic legacies of slavery in identifying guilty parties. This repair is not one that satisfies the politically possible, or the culturally and contextually appropriate, but is instead one that speaks directly to the everyday desires and rationales that organize everyday Black life as it stands in continuous relation to historical and contemporary subjugation. This talk therefore takes seriously the illegible claim of criminal repair, for only in making such a claim can those seeking repair be permitted to fully envision the emancipation long promised and long withheld.

Jovan Scott Lewis is an Assistant Professor of Geography and African-American Studies at the University of California, Berkeley. He also serves in the Economic Disparities Research Cluster at Berkeley’s Othering and Belonging Institute. He received his Ph.D. in anthropology from the London School of Economics. His research focuses on the experiences and articulations of structural poverty and everyday subjectivity, the circumstances of state economic underdevelopment, and of the ethical notions that are produced in response to impoverishment.
Jovan’s forthcoming book, Scammer's Yard: The Crime of Black Repair in Jamaica, explores the overlapping wakes of colonial independence and structural adjustment and how the postcolonial condition of poverty produced therein is responded to through crime.

The debate about reparations for victims of colonial slavery and Jim Crow usually turns on the question of legal subjectivity (Are the people affected by these developments the victims of crimes against humanity? If so, which ones?), feasability (How would reparations actually be implemented? Who would get them?), or cost (Can the government actually afford it?). Instead, this paper draws upon rather mundane protocols for assessing the monetary value of a human life in accident compensation and federal regulations to demonstrate how those approaches make it easier to imagine what reparations can look like. In approaching the question of reparations from an actuarial lens, this paper explores what it might look like to compensate the victims of colonial slavery and Jim Crow by drawing upon rather detailed and familiar actuarial approaches to grappling with the loss of life in the case of accidental death and in the event of civil infractions and violations of human rights.

Michael Ralph teaches in the Department of Social and Cultural Analysis and the School of Medicine at New York University.

He is the recipient of fellowships from the Andrew W. Mellon Foundation, Woodrow Wilson Foundation, Social Science Research Council, National Science Foundation, Institute for Advanced Study in Princeton, as well as the Charles Warren Center for Studies in US History and a former recipient of the W.E.B. Dubois Fellowship at Harvard University.

Michael’s 2015 book Forensics of Capital demonstrates that the social profile of an individual or country is a credit profile as well as a forensic profile.

Michael’s recent picture book, Fishing, demonstrates that ingenuity cannot be incarcerated. It is available on Amazon.com and in stores. Michael recently launched a Kickstarter for the Fishing short animated film: http://kickstarter.com/projects/mralph/fishing-an-animated-short-film