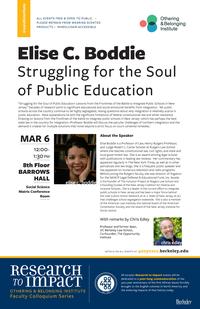 "Struggling for the Soul of Public Education: Lessons from the Frontlines of the Battle to Integrate Public Schools in New Jersey."

Decades of research point to significant educational and social-emotional benefits from integration.  Yet public schools across the country continue to be highly segregated, raising questions about why integration is relatively scarce in public education.  Most explanations lie with the significant limitations of federal constitutional law and white resistance.  Drawing on lessons from the frontlines of the battle to integrate public schools in New Jersey--which has perhaps the best state law in the country for integration--Professor Boddie will discuss the peculiar challenges of northern integration and the demand it creates for multiple solutions that move beyond a strict focus on court-centered remedies.

This talk is part of the Othering & Belonging Institute's Research to Impact series as well as UC Berkeley's 400 Years of Resistance to Slavery and Injustice initiative. 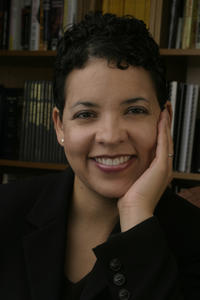 Elise Boddie is a Professor of Law, Henry Rutgers Professor, and Judge Robert L. Carter Scholar at Rutgers Law School where she teaches constitutional law, civil rights, and state and local government law.  She is an award-winning legal scholar with publications in leading law reviews.  Her commentary has appeared regularly in The New York Times, as well as in other periodicals and law blogs. She is a frequent public speaker and has appeared on numerous television and radio programs. Before joining the Rutgers faculty, she was director of litigation for the NAACP Legal Defense & Educational Fund, Inc.

Boddie is the founder of The Inclusion Project at Rutgers Law School and a founding trustee of the New Jersey Coalition for Diverse and Inclusive Schools.  She is a leader in the current effort to integrate public schools in New Jersey and has been a major force behind the case (Latino Action Network, et al. v. State of New Jersey, et al.) that challenges school segregation statewide.  She is also a member of the American Law Institute, the national board of the American Constitution Society, and the board of the New Jersey Institute for Social Justice.  Boddie is an honors graduate of Harvard Law School and Yale and holds a master’s degree in public policy from the Kennedy School of Government.