THIS EVENT HAS BEEN POSTPONED TO THE FALL 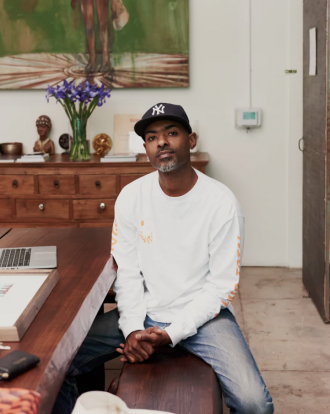 Join artist and filmmaker Kahlil Joseph for an evening of conversation focused on BLKNWS, an ongoing project that blurs the lines between art, journalism, entrepreneurship, and cultural critique. A “fugitive newscast” that explores and exposes traditional media formats, BLKNWS made its international debut as an anchoring project of the 58th Venice Biennale in 2019, and was included in the 2020 Sundance Film Festival New Frontier slate with screenings across the country. In addition to public satellite installations across the world, BLKNWS is held in the collections of private individuals and public art institutions, highlighting its innovative dual function as both a work of art and a business. With rolling installations planned across the UC Berkeley campus during the 2020–21 academic year, this conversation will address the various permutations of BLKNWS and the extensive efforts and interests supporting the project.

Joseph is joined in conversation by UC Berkeley faculty Leigh Raiford, associate professor and H. Michael and Jeanne Williams Chair of African American Studies and affiliate faculty in the Program in American Studies and the Department of Gender and Women’s Studies; and Shannon Jackson, associate vice chancellor for the arts and design, Cyrus and Michelle Hadidi Chair in the Humanities, and professor in the Departments of Rhetoric and Theater, Dance, and Performance Studies.

Kahlil Joseph (b. 1981, Seattle, WA) is a Los Angeles-based American artist and filmmaker best known for his large-scale video installations. In 2019, Joseph received a VIA Production | Acquisition Grant to support the international debut of BLKNWS at the 58th Venice Biennale. BLKNWS was incubated at the Cantor Arts Center at Stanford University through roundtable discussions with faculty, staff, and students as part of Joseph’s 2018-2019 Presidential Residency on the Future of Arts. In 2016, Joseph was nominated for an Emmy award for his co-direction of Beyoncé’s visual album Lemonade. He is a recipient of a 2016 John Simon Guggenheim Memorial Fellowship and a 2017 Los Angeles Artadia Award. Joseph currently serves as the artistic director of The Underground Museum, a pioneering independent art museum, exhibition space and community hub in Los Angeles that he co-founded with his late brother, the visionary artist and curator, Noah Davis.